How many calories break a fast?

It’s important to know this number so you can maximize your results from intermittent fasting.

Before we dive into it, I’m going to tell you now that you should not worry too much about this stuff. What I mean by that is if you’re even willing to take a break from eating and try intermittent fasting. If you’re willing to skip breakfast and not eat your six meals a day, then you’re already ahead of 95% of the general population trying to lose weight.

If you can even wrap your head around the fact that you should probably take a break from eating if you can lose weight, then you’re way ahead of the game already.

In my opinion, intermittent fasting is the most powerful and sustainable way to lose weight. Because it’s not really a diet. It’s an eating pattern.

It’s the main strategy that I used to finally transform my body. I was able to melt all the fat around my stomach and turn into a six pack. It’s also something that I get all my private coaching clients to do regularly and they’ve all gotten amazing results because of it. So you know it works. 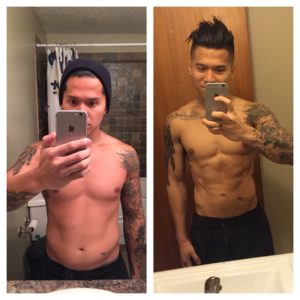 But there are rules to intermittent fasting.

The biggest one being, how many calories does it take to break a fast? I’m going to answer that question in this video.

How Many Calories Break A Fast?

If we’re being really technical and scientific about this, anything that has any calories or anything where your digestive system has to process it technically breaks your fast.

Basically, anything other than water technically breaks your fast. But the key word here is “technically”, so stay with me because it’s not the end of the world. Let me explain.

I’m going to say that 90% of people who try intermittent fasting do it because they want to lose weight. You’re probably one of them. One of the biggest benefits of intermittent fasting is it puts you in a state of ketosis where you’re burning your own body fat for energy. So what we really want to focus on is, how do you stay in ketosis?

If you’ve never heard of that term before, it’s a state where your body starts breaking down your own body fat for energy. The byproduct of it is called “ketone” bodies. Your body then uses ketones for energy. It’s a much cleaner burning fuel compared to burning sugar for energy.

If you want to know how many calories break a fast, you need to start with what you consume while fasting. That’s where certain drinks come into play. Coffee, tea, and soda water are the often recommended drinks for fasting. Let’s talk about how your body reacts to them in further detail.

Can You Drink Coffee While Fasting?

Coffee has about 3 calories per cup. So technically, for all the purists out there, I’m going to admit that coffee does “break” your fast because your body has to process it once it enters your stomach. But again, it’s not a big deal because coffee keeps your body in ketosis. Again, if you’re trying to lose weight, that’s what we want.

There’s actually a lot of studies that shows coffee increases the production of ketones. Plus, it’s delicious. It’s the exact same thing with drinking green tea while fasting. Green tea is actually full of something called Catechins which is a very powerful antioxidant. Plus, people have been drinking tea for thousands of years. Long story short, tea is good for you whether you’re fasting or not. That’s why you often hear that black coffee and tea are the recommended drinks whenever you fast.

The other thing that plays into this is drinking coffee and tea increases adherence when you’re fasting. They make fasting easier. Your success when it comes to dieting and achieving a successful weight loss transformation is all about adherence. Adherence is everything. It doesn’t matter to me that you have the best weight loss strategy on the planet. If it’s hard to adhere to, you’re not going to stick to it. You’re going to quit because it sucks.

I mentioned this earlier that if you’re fasting but you’re only getting about 90 to 95 percent of the benefits because you’re technically “breaking” it because you’re drinking coffee, who cares! You’re still winning. You’re still way ahead of those people drinking overpriced cold pressed juice and weight loss shakes.

That’s why coffee and tea are the generally accepted drinks when you fast because it increases adherence. If you tell someone that they can’t have black coffee or tea first thing in the morning, they’re probably not gonna last. That’s way too hard to follow.

But this is where you draw the line in the sand when it comes to figuring out how many calories break a fast.

When I was doing my research, I was just going to say that you should stick to coffee, tea, and water. That’s it. It’s pretty straight forward, right?

But then I saw an arbitrary number floating around.

Some “experts” out there claim that you can eat up to 50 calories while you’re fasting and you’re still going to be technically fasted. That’s completely false. That doesn’t even make any sense.

What controls this process is the hormone insulin.

Once you trigger an insulin response in your body, your fast is over. The moment you raise your insulin levels by breaking your fast, your body switches from fat burning mode to fat storage mode. Insulin gets triggered every time you eat something. So even if it’s just 50 calories, your fast is done. You don’t need to be a rocket scientist to figure that out.

Does Artificial Sweeteners Break A Fast?

Does it break your fast? Absolutely. It doesn’t matter that it’s “zero” calories. They’re sweetened with artificial sweeteners which your body treats as real sugar once it enters your system. Your body doesn’t count calories anyway. You don’t have a calorie counter in your body.

The perfect example of this is Diet Coke. It has zero calories and everyone including their dog drinks it. The problem is, it contains an artificial sweetener called aspartame. If you do a little research on aspartame, it actually does not trigger an insulin response. However, it’s been shown to completely destroy your gut microbiome therefore wreaking havoc in your digestive system.

Diet Coke has also been linked to obesity. I mean, just think about it this way. Do you know anybody that attributed drinking Diet Coke to losing a lot of weight? No. Oftentimes, the people that need to lose the most amount of weight are the ones that drink Diet Coke because they they think that it’s better for you than regular soda. It’s not. It’s the same thing with your zero calorie pre-workout and your zero calorie BCAA. They’re sweetened with artificial sweeteners. It breaks your fast.

Does Stevia Break A Fast?

What about Stevia? Does Stevia break a fast? Sure, it’s a healthier alternative to regular sugar. But in my opinion, it’s no better than the aforementioned artificial sweeteners I just mentioned. Stevia still triggers an insulin response in your body. It still triggers your “sweet tooth”. Which means that your body is still going to crave sweet stuff.

You’re simply not helping your own cause if you keep taking artificial sweeteners. This is absolutely an all-or-nothing scenario. You can use Stevia as kind of a training wheel when you’re just starting out but eventually, you’re just gonna want to go without it completely.

At the end of the day, the whole point of fasting is to create periods of time where you’re taking a break from eating. You’re creating a window where you’re moderating your insulin levels so you can use your stored body fat for energy. If you’re trying to lose weight, that’s exactly what you want.

It’s not about gaming the system.

The whole point of this is that you want to stay true to the fast and keep it to zero calories where you’re just drinking water, black coffee, and tea. It’s not about trying to see what you can get away with. You’re trading in a little bit of discomfort for some life changing results. So stay fasted.

PS. Have you nabbed your copy of The “No Diet” Diet yet? It’s awesome, I promise. Click HERE to get a copy today!