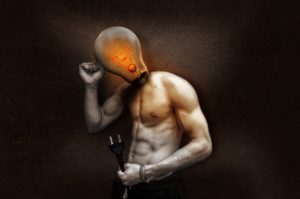 You’ve tried it all.

You’ve gone Paleo. You skipped the carbs. You ate more protein. You weighed your food. You drank lemonade mixed with cayenne pepper. You tried drinking ten dollar cold pressed juice. You even experimented with going vegan.

You’ve tried spinning. You danced your butt off doing Zumba. You’ve done about a million sit-ups. You bought P90X. You even tried kick boxing.

Unfortunately, none of it worked.

I could write an entire book trying to explain why you didn’t get the results you were looking for but I’ve found that there’s really only one common denominator in all of this.

This is something I talk about a lot but for good reason. If you have a shitty attitude, you’re not going to get results. Period.

There, I said it.

You could have the best diet and the best workout program laid out in front of you but if you have a terrible attitude and you’re not willing to put in the work, you might as well not even try.

You need to stop complaining about how hard you have it and how hard your life is. Stop playing the victim card. Seriously.

There are people who REALLY have it rough.

People getting their homes bombed (Have you seen the news lately?). They have nothing to eat. They have no jobs. Some people are born with disabilities. Some people get in to car accidents and get limbs taken away from them. They’re the ones who have it rough.

If you have a roof over your head, food on the table, have a job, can use both your arms and legs, have a cell phone, have time to go on social media and watch dog videos or whatever you’re in to, then you really don’t have much to complain about.

If you have access to clean drinking water, you are among the luckiest of all humans on earth.

People complain about how hard it is to motivate themselves to workout after a long day at work. How they have no time to workout. Yet these are the same people who watch hours and hours of Netflix every night.

People complain about how it’s so hard to lose weight. Yet these are the same people who are first at the buffet line.

Why do I write about all of this in a fitness article?

Your attitude towards anything will determine your outcome. And your attitude is based on your life and the issues you deal with. I want you to take a minute to put into perspective the majority of your problems and issues.

It’s too hard to workout. Think about quadriplegic people who would probably give up just about anything if there’s even a chance they could take a single step again.

You’re complaining about eating leftovers. Think about those homeless people going through dumpsters right now looking for something to eat.

You’re writing a list of things you want to change as part of your New Year’s Resolution. So you just delay everything until then. The thing is, life shouldn’t start on January 1st.

Stop waiting for the right opportunity. There will never be a perfect moment.

Yes, it’s going to be HARD. It took you months, even years to get to your current state. Why would you expect things to just change overnight?

Listen, we’re all given the same 24 hours. If you spend your time doing half-assed work, you’re going to live a half-assed life.

Anything worth having takes time. If you’re going to do something, you need to fully commit to it. Don’t just do it when it’s convenient for you. 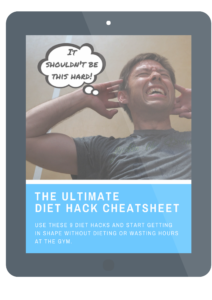 Use these 9 hacks and start getting in shape without dieting or wasting hours at the gym. Get the Ultimate Diet Hack Cheatsheet here for free!