When I was doing my research for this post, I found that Panda Express has quite a bit of options when it comes to entrees and a lot of them are definitely not keto. Even the ones that you might think would be low carb.

So I ordered a bowl (one entree and a side) and two other entrees for comparison. I also did a full breakdown of the Panda Express keto options in this video.

When you go into any Panda Express location, you’re presented with 16 entree options and you definitely want to be smart about it especially if you want to keep it keto.

Pro tip #1: Don’t be scared to ask for tasters when you’re ordering

Pro tip #3: You definitely want to skip any sauce of any sort. It’s literally just liquid sugar. I know it’s delicious but it’s not keto.

I got a Panda Bowl which is one entree and one side. It’s the perfect meal if you ask me. It’s a lot of food The Panda Bowl came in this nice little to-go box

Verdict: The kung pao chicken was a little spicy. It definitely had some kick to it but it’s really tasty. Kung pao chicken is kind of a staple of any Chinese food or Chinese fast food restaurant so I’d be remiss if I didn’t try it. The box doesn’t look like the biggest but trust me they definitely stuff as much food as they can

The broccoli was nice and fresh.10 out of 10 would order this again. The spice is just enough. The broccoli is nice and crunchy and the chicken was really tender.

Nutrition: Let’s talk about some numbers. The kung pao chicken has 290 calories. But most importantly, it had 12 grams of net carbs. Not too bad. There’s definitely a lot of food there to fill you up. 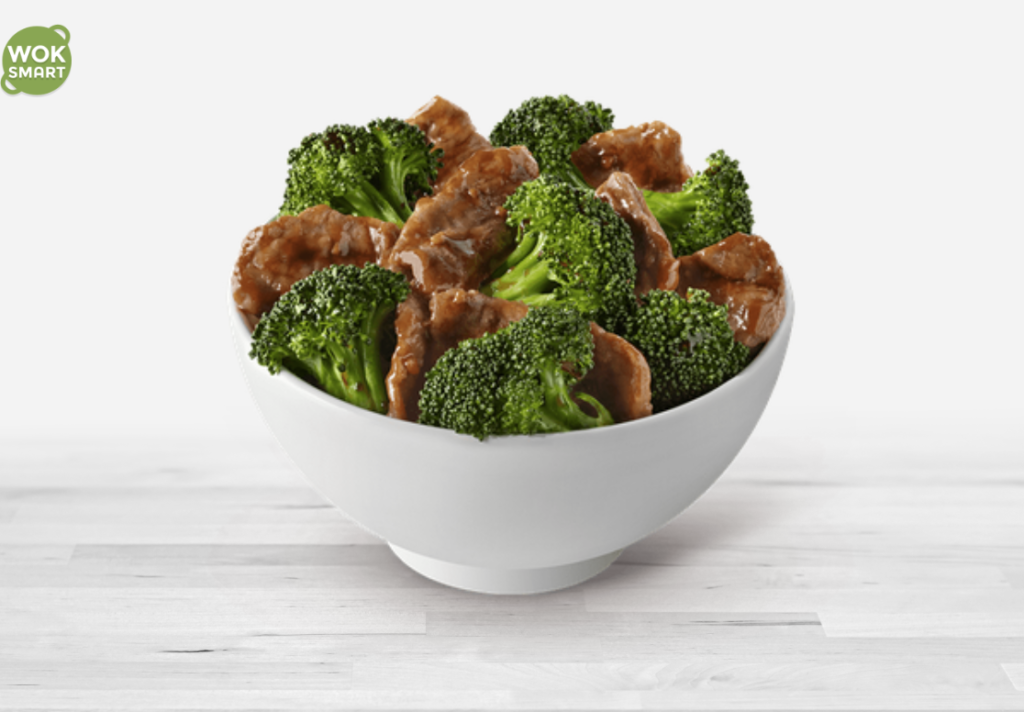 Verdict: They actually gave me mostly beef when I ordered which was great. The broccoli is cooked perfectly which made it nice and crunchy. The beef has lots of flavor and it’s nice and tender. Chinese food is literally the tastiest food on the planet.

Nutrition: The broccoli beef has 150 calories and only 11 grams of net carbs. Very low calorie and very low on the carb count. It’s definitely another great option especially if you’re trying to lose weight on keto. 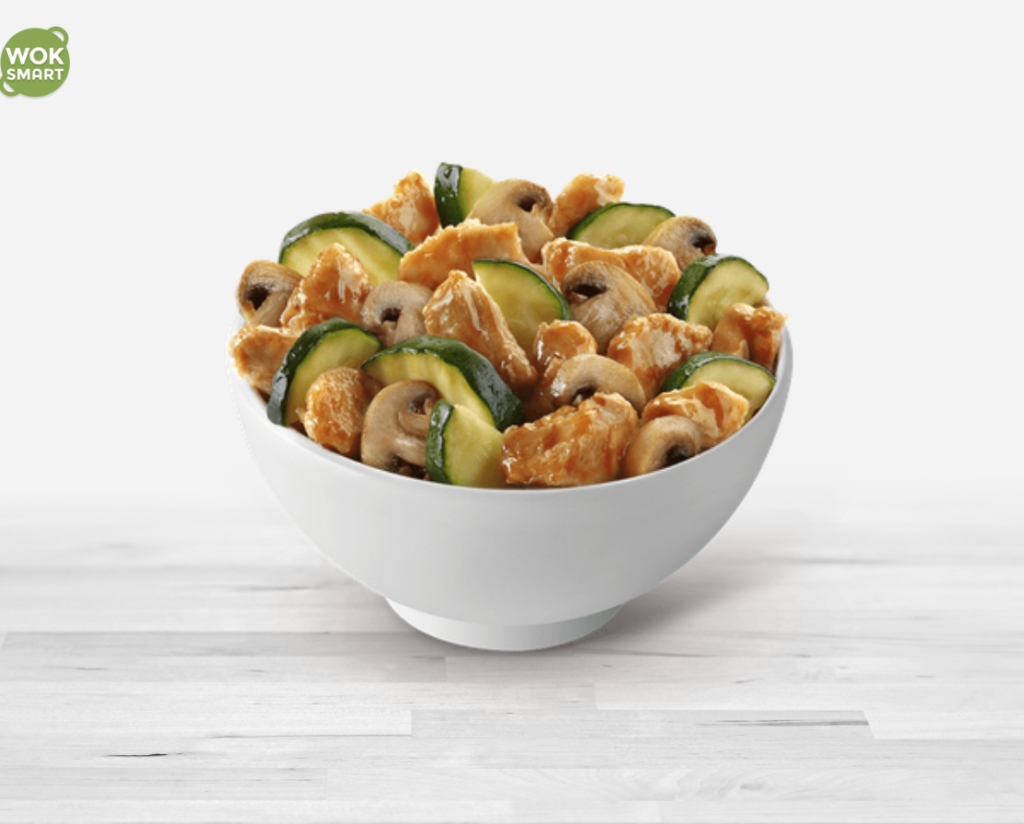 Verdict: The chicken is really tender with lots of flavour. Same goes for the mushroom. Super tasty. I would order all three dishes that I tried every day if I could. It’s a little saucy and I’m gonna talk about why that’s important in a second.

Nutrition: The mushroom chicken had 220 calories and 10 grams of net carbs. Again, another great keto option if you’re eating at Panda Express.

So now you can kind of see how this works. If you let’s say order a side of mixed vegetables which had 5 grams of net carbs and then you just order one of the three entrees that I just sampled, you can definitely keep it keto.

You still have plenty grams left for the day for your carb intake and you don’t have to ruin your diet just because you’re eating fast food. Again, there is always a way around it. It’s only your imagination that’s limiting you from staying on keto when you’re eating out. All right let’s look at the rest of the menu. We’re gonna go through it in order.

The first section is ‘build your own’. What I would recommend is to get a bowl (like I did). So that would be one side and one entree. You should definitely not get a plate and definitely not a bigger plate if you’re on keto.

As you’ve seen from my examples above, Panda Express entrees are naturally higher on carbs because of the sauce they use. You can get away with one side and one entree but two entrees will definitely take you out of ketosis.

Next, we have ‘recommended meals’. We’re gonna skip all of these because

they all come with rice and/or noodles. That’s why I recommend building your own Panda Bowl. I’m also going to show you which entrees to pick in a second here.

Next in line are appetizers. Panda Express has three appetizers that you can choose from. Unfortunately, they’re all high in carbs. The chicken egg roll for example has a whopping 18 grams of net carbs for one chicken egg roll. That is not a good bang for your buck in terms of keeping your carb count low. It’s the same thing with the veggie spring roll and the cream cheese rangoon so we’re gonna skip all those three.

Now we’re on the ala carte menu. First, we’re just gonna start with what you can order when you’re on keto. Basically if you’re going through this yourself, anything with the ‘Wok Smart’ symbol are your keto Panda Express options. There are six of them and we’re gonna go through all of them. 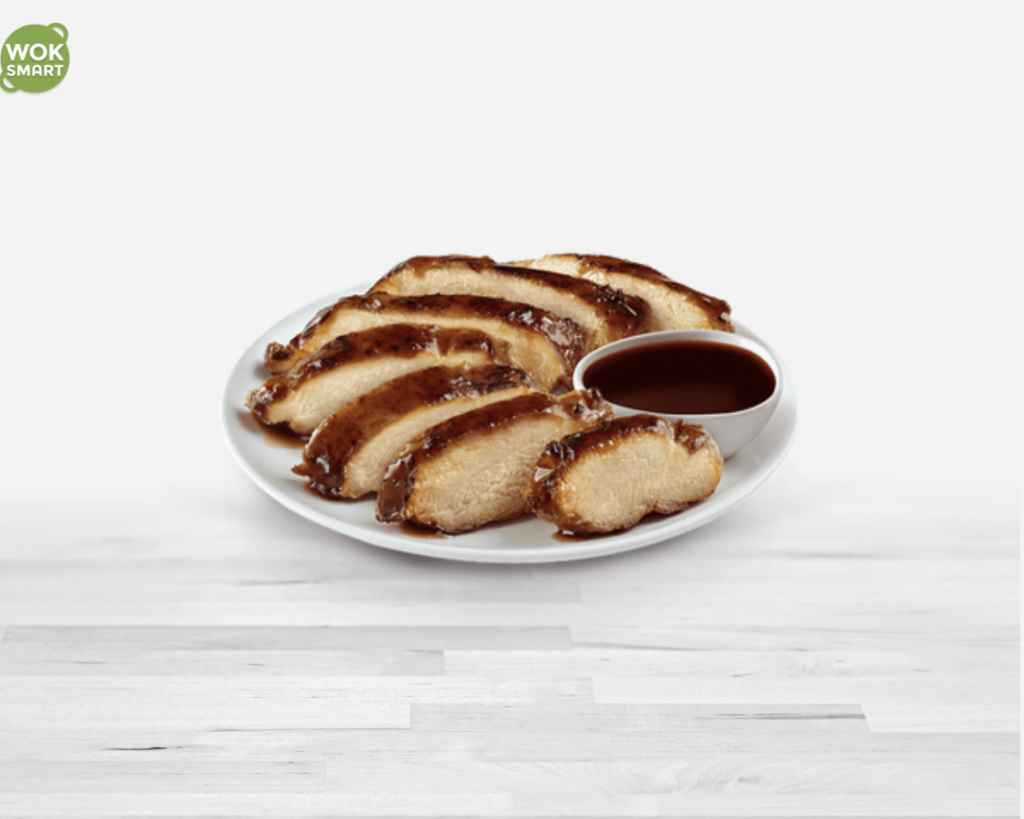 First one is the grilled teriyaki chicken. It has 8 grams of net carbs and all of those net carb comes from the sauce. I mentioned earlier that any sauce from Panda Express is a big no-no. This is a perfect example. The teriyaki chicken has 8 grams of sugar so if you actually order it without the sauce, it’s gonna be zero carbs. It makes sense because chicken naturally has zero carbs. Duh.

It’s a great option if you just want to keep things nice and simple. It’s kind of a dead giveaway that’s why I didn’t order it. 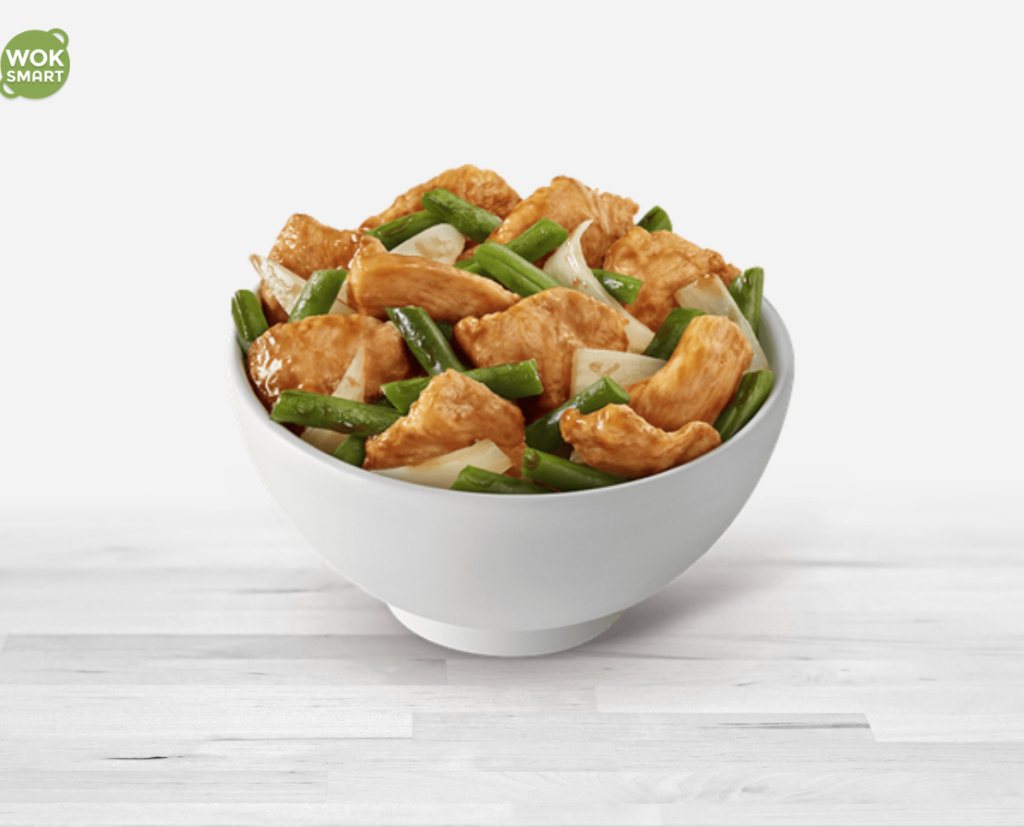 Next is the string bean chicken. This is another great keto option coming in at 13 grams of carbs and 4 grams of fiber which gives us 9 grams of net carbs.

It’s super low in the carb count and the ingredients are pretty simple. You get chicken breast, string beans, and onions wok tossed in a mild ginger soy sauce. Sounds delicious!

Next is the kung pao chicken. This is what I ordered for my Panda Bowl. It’s actually one of the entrees that’s a little bit higher on the carb count but still falls in the acceptable range.

It comes in at 12 grams of net carbs and it has chicken, peanuts, and vegetables finished with chili peppers. Again, most of those carbs are coming from that Szechuan sauce that they use.

Next we have the mushroom chicken. This is the other entree that we tried coming in at 10 grams of net carbs. It has chicken, mushrooms, and zucchini wok tossed with a light ginger soy sauce. Again, most of those 11 grams of net carbs coming from the sauce. 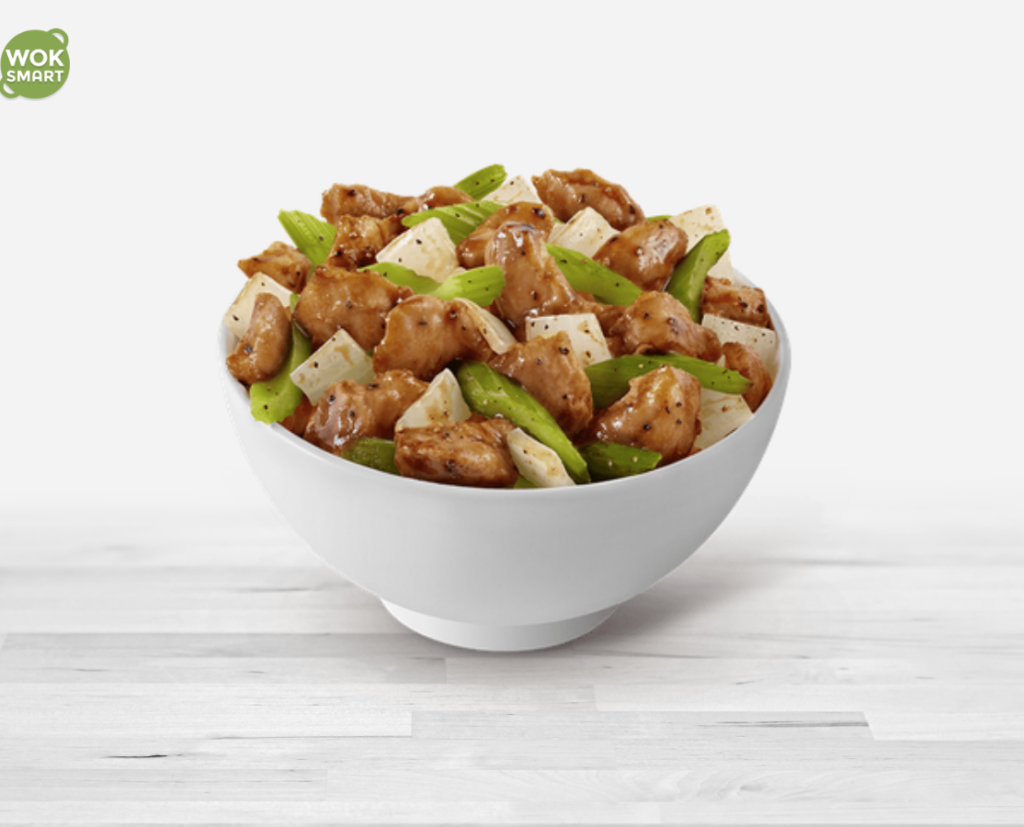 Your next option would be the black pepper chicken coming in at 14 grams of net carbs. A little high on the carb count but still acceptable. It has marinated chicken, celery, and onions in a bold black pepper sauce.

And lastly, we have the broccoli beef. It has 11 grams of net carbs and it’s pretty straightforward. You get beef and broccoli in a ginger soy sauce.

What NOT To Get At Panda Express

Now let’s talk about what not to get at Panda Express.

Basically, anything other than the six options that I laid out for you is not Keto.

The honey sesame chicken breast, honey walnut shrimp, and the orange chicken are perfect examples of what not to get at Panda Express. It honestly just says in the name. The words ‘honey’ and ‘orange’ means it’s sweet.

The sweet fire chicken breast is a dead giveaway as well. I mean, it has the word ‘sweet’ in it for God’s sake. If you actually look at the nutrition facts, it comes in at a whopping 47 grams of carbs. Yikes.

The Beijing beef is another example of what not to get at Panda Express. It’s basically their version of ginger beef coming in at a whopping 45 grams of net carbs. One order of it and you’re automatically at your maximum carb limit for the day.

Next up is the shanghai angus steak.

This item can be keto but it comes in at 16 grams of net carbs. It’s definitely on the higher side. This is one of those fringe keto options. You can get it but you definitely have to be careful with your carb count for the rest of the day.

The eggplant tofu, if you’re vegetarian, would probably be your only entree option. The problem is, it’s pretty high on the carb count coming in at 20 grams of net carbs. You might have to just stick with their side order of mixed vegetables if you’re vegetarian.

Speaking of sides, your two options are either their mixed vegetables or super greens.

The mixed vegetables is what I got with my Panda Express keto bowl and it’s definitely keto friendly. It has broccoli, zucchini, carrots, string beans, and cabbage. The carb count includes carrots and it has 5 grams of net carbs. If you don’t eat the carrots, it’s probably even lower on the carb count so it’s definitely a great option to get as your side when you’re at Panda Express. It’s the same thing with the super greens. It has 5 grams of net carbs and it has broccoli, kale, and cabbage.

Going back to Panda Express keto options, I recommend getting a panda bowl (one side and one entree). You can pick from one of the six Wok Smart entrees that I laid out for you in this post. You then combine it with either mixed vegetables or super greens as your side. It’s definitely possible to eat at Panda Express and stay on keto at the same time. One last thing. I almost forgot. Fortune cookies are definitely not keto. 🙂

PS. Have you nabbed your copy of The “No Diet” Diet yet? It’s awesome, I promise. Click HERE to get a copy today!